In FreeFEM, the domain \(\Omega\) is assumed to be described by the left side of its boundary.

The following is the FreeFEM program which computes \(u\):

As illustrated in Fig. 2, we can see the isovalue of \(u\) by using FreeFEM plot command (see line 29 above). 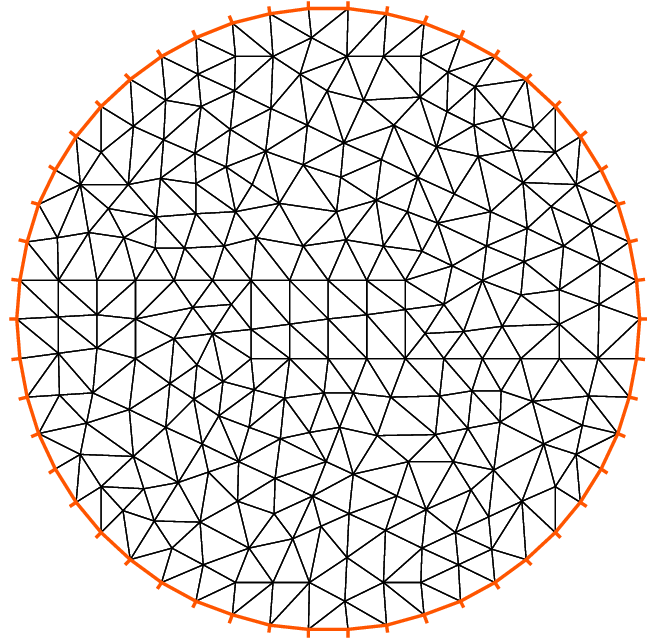 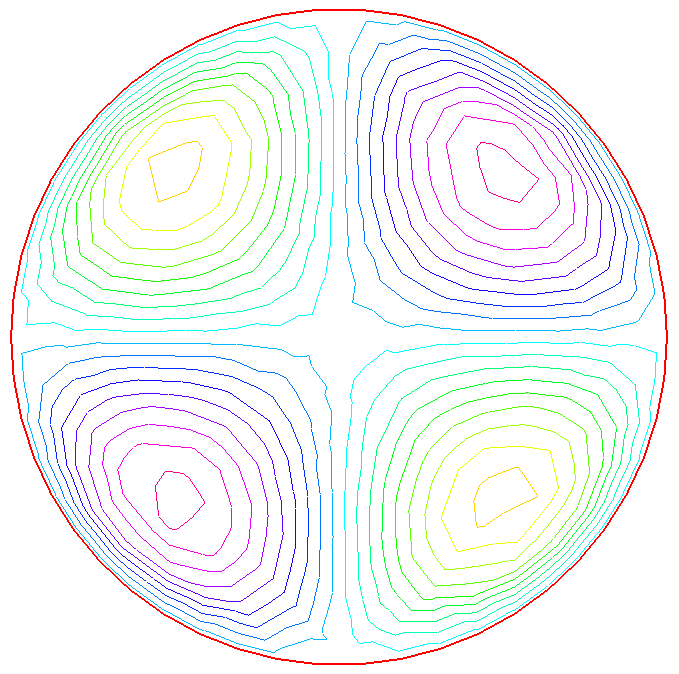 The qualifier solver=LU (line 18) is not required and by default a multi-frontal LU is used.

The lines containing clock are equally not required.

Note how close to the mathematics FreeFEM language is.

Lines 19 to 24 correspond to the mathematical variational equation:

Change P1 into P2 and run the program.

This first example shows how FreeFEM executes with no effort all the usual steps required by the finite element method (FEM). Let’s go through them one by one.

The keyword label can be added to define a group of boundaries for later use (boundary conditions for instance). Hence the circle could also have been described as two half circle with the same label:

Boundaries can be referred to either by name (Gamma1 for example) or by label (C here) or even by its internal number here 1 for the first half circle and 2 for the second (more examples are in Meshing Examples).

The domain is assumed to be on the left side of the boundary which is implicitly oriented by the parametrization. So an elliptic hole can be added by typing:

If by mistake one had written:

then the inside of the ellipse would be triangulated as well as the outside.

Automatic mesh generation is based on the Delaunay-Voronoi algorithm. Refinement of the mesh are done by increasing the number of points on \(\Gamma\), for example buildmesh(C(100)), because inner vertices are determined by the density of points on the boundary.

Mesh adaptation can be performed also against a given function f by calling adaptmesh(Th,f).

A finite element space is, usually, a space of polynomial functions on elements, triangles here only, with certain matching properties at edges, vertices etc. Here fespace Vh(Th, P1) defines \(V_h\) to be the space of continuous functions which are affine in \(x,y\) on each triangle of \(T_h\).

As it is a linear vector space of finite dimension, basis can be found. The canonical basis is made of functions, called the hat function \(\phi_k\), which are continuous piecewise affine and are equal to 1 on one vertex and 0 on all others. A typical hat function is shown on Fig. 4. 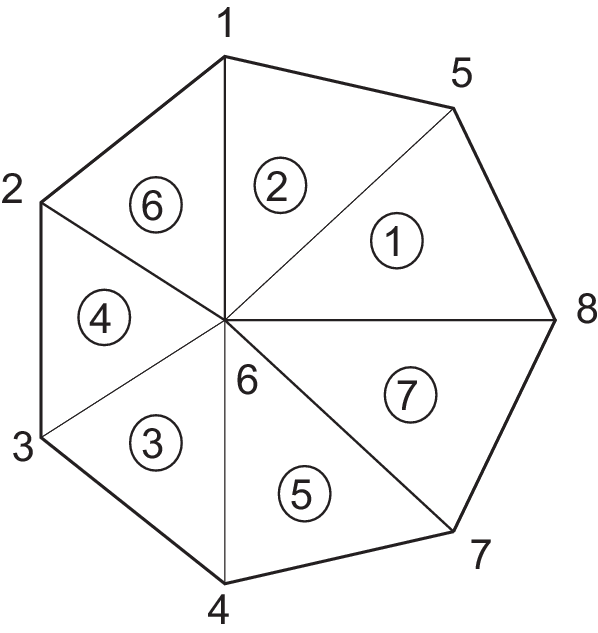 It is said also that the nodes of this finite element method are the vertices.

On the line 12, the right hand side f is defined analytically using the keyword func.

Line 18 to 26 define the bilinear form of equation (1) and its Dirichlet boundary conditions.

This variational formulation is derived by multiplying (1) by \(v(x,y)\) and integrating the result over \(\Omega\):

Then, by Green’s formula, the problem is converted into finding \(u\) such that

In FreeFEM the Poisson problem can be declared only as in:

and solved later as in:

or declared and solved at the same time as in:

In FreeFEM bilinear terms and linear terms should not be under the same integral indeed to construct the linear systems FreeFEM finds out which integral contributes to the bilinear form by checking if both terms, the unknown (here u) and test functions (here v) are present.

On line 15, the current time in seconds is stored into the real-valued variable cpu.

Line 18, the problem is solved.

Line 29, the visualization is done as illustrated in Fig. 2.

(see Plot for zoom, postscript and other commands).

Line 32, the computing time (not counting graphics) is written on the console. Notice the C++-like syntax; the user needs not study C++ for using FreeFEM, but it helps to guess what is allowed in the language.

Internally FreeFEM will solve a linear system of the type

The number \(10^{30}\) is called tgv (très grande valeur or very high value in english) and it is generally possible to change this value, see the item :freefem`solve, tgv=`

The matrix \(A=(A_{ij})\) is called stiffness matrix. If the user wants to access \(A\) directly he can do so by using (see section Variational form, Sparse matrix, PDE data vector for details).

The vector \(F\) in (5) can also be constructed manually:

The problem can then be solved by:

The linear system (5) is solved by UMFPACK unless another option is mentioned specifically as in:

meaning that Poisson is declared only here and when it is called (by simply writing Poisson;) then (5) will be solved by the Conjugate Gradient method.